Berkeley-based jewelry designer Wilfy MacManus lends a special touch to each piece he creates. His jewelry collection showcases a lifelong interest in Celtic design, an artist's eye, and a tradition of excellence passed down from previous generations.

Born in the city of Belfast, Wilfy was raised in Northern and Western Ireland. At an early age, his father taught him to draw and to paint, two activities he still loves and enjoys. When he was only six, Wilfy recalls collecting stones and pieces of jewelry to disassemble and reassemble, a hobby that he never gave up, and that he believes eventually led him to jewelry-making. He credits his grandfather, who taught him his other great love (fishing), with sparking his interest in designs of a Celtic nature. 'I was very influenced by my grandfather's interest in early Celtic designs and carvings. He'd often bring me with him to archaeological sites and monasteries.' 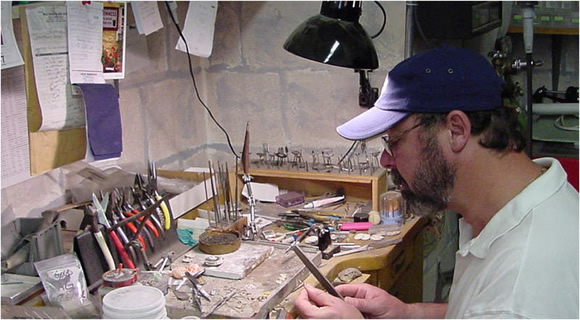 After studying design at the University of Ulster (Belfast Art College), he taught at the Open University, and then moved to the US to continue his education and to teach. Together with friend Jeff Taylor, who Wilfy affectionately calls 'one hell of a craftsman,' he eventually started the Celtic jewelry company called MacManus and Taylor, known largely for its work throughout the Renaissance Faire both in Northern and Southern California. The company later became named MacManus and Sons.

MacManus and Sons Celtic Jewelers specializes in handmade jewelry along with other unique gifts and jewelry with a Celtic theme. Most designs are cast, a process which produces a high quality yet reasonably priced article. Wilfy specializes in custom fabricated designs made from silver, gold and platinum.